My training program, The SEO Playbook, is re-opening soon. Find out more about the course and see what current students are saying about it here.

You can get a LOT more traffic from the search engines without creating new content or backlinks.

These are partial answers to a specific user query shown at the top of Google’s search results. Featured snippets come in all shapes, sizes and formats. In Google’s words, snippets are meant to “enhance and draw user attention on the results page”.

And, since the snippets take up so much valuable real estate at the top of SERP, they get a lot more impressions and clicks: The same study found that ~13% of all search results now return a featured snippet: Featured snippets steal organic traffic from all the other search results, including the content ranking in the #1 position.

This presents a couple BIG opportunities:

It doesn’t require a ton of time and money to land a featured snippet and reach “position #0”.

In this featured snippet guide, I’m going to walk you step-by-step through:

Prefer video? Check out the tutorial below:

Before we jump in, here are a few things to keep in mind as we work through the tutorial: 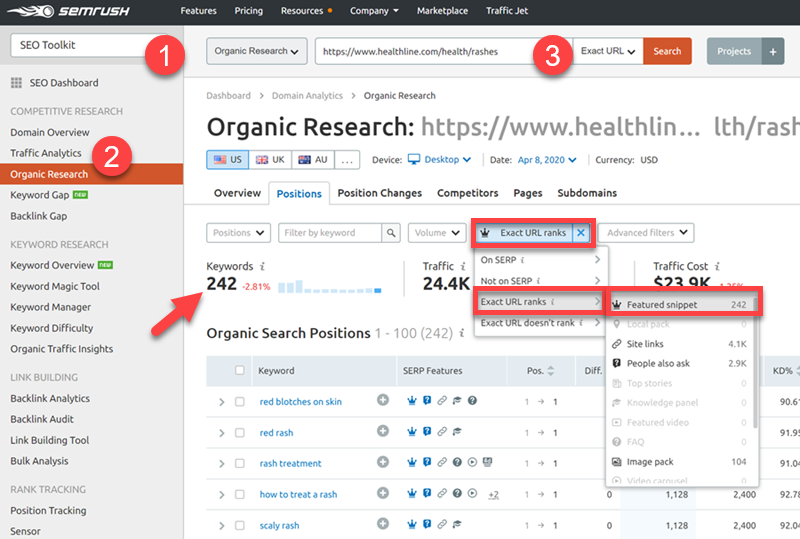 Imagine the instant impact on your organic traffic if you were able to land dozens, hundreds or even thousands of featured snippets across your articles:

An earlier study of Google’s featured snippets (back when they were known as rich answers), shows the traffic boost you can get: Now that you know how valuable featured snippets can be, let’s jump into the different types and how to get them for your site.

What are the Different Types of Featured Snippets?

There are 4 core types of featured snippets - paragraphs, lists, tables and YouTube snippets:

Note: Featured snippets are not to be confused with Rich Snippets, Instant Answers or Knowledge Graphs.

The distinction lies in the attribution. Featured snippets are the only results that include source links and pull answers from the top search results

Paragraph snippets are the most common and seek to provide searchers with a direct answer to their query. Often, they’re displayed alongside an image chosen from another source.